The sun has come out!

It has been so nice to see the sun appear this week. I have taken a layer off Max pony and he is shedding his hair but little Diva is still mostly hanging on to hers at the moment! I don't blame her, the weather has been bizarre so far this year. The dogs have been enjoying it too, Brodie was actually panting on his walk today. Brax is starting to follow the sun round from room to room again, just one of her many feline tendencies!

We didn't have a show at the weekend as we went to a family wedding on Saturday and I was training on Sunday. We did do some training with Dolly and the two gingers but poor Brodie is ouot of action for a week after falling off the dogwalk on Friday :( I had taught all day on it and not had a problem, it was a sudden gust of wind that took him off. He is just under 7kg so there is not much of him under the fluff! Luckily Sally the physio was able to fit us in on Monday so he has exercises to do but can't run at Shuttleworth this weekend. Its a shame as I was looking forward to doing the ABC agility with him. He is still being walked mainly on lead so here are some pics of the gingers and their mate Jess walking today.

Brooke watching birds in the hedge 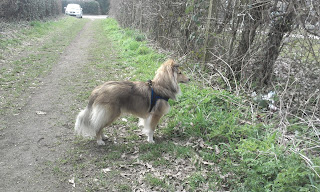 All in a line having a sniff :) 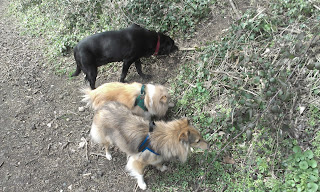 These photos actually prove that the sun was out!! I love how both girls coats are coming back in, Brooke has a lovely coat at the moment which has got darker and she is finally filling out! 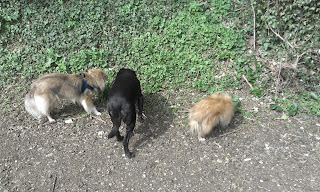 Bunch of posers!! They love pottering around together :) 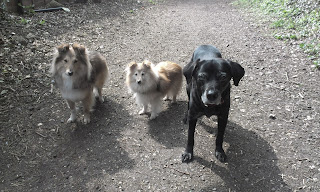 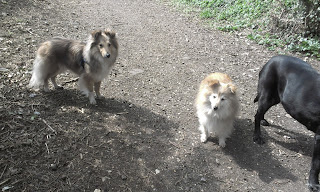 Sparkle will be 10 weeks old tomorrow! She is just gorgeous - very quick to pick things up and plenty of attitude. She still reminds us so much of Brax as a puppy - a cheeky monkey!! While I'm typing this she has just managed to get on the other sofa for the first time and has found the stash of toys up there :) She still loves auntie Brooke best as she will play with her. We don't let them play too much as I know it can create masses of problems physically  being bashed around even though Brooke is gentle there is still quite a size difference! Here they are having a little play earlier after a walk (or carry in Sparkles case!) 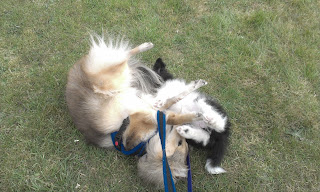 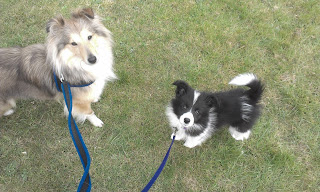