Have you ever seen a pig fly..? 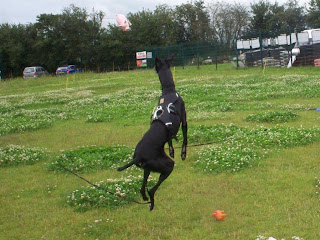 Spot the flying pig!! This is Mitch having a mad moment in the field with his piggy! His lovely Mum and Dad bring him and the other three members of his canine family for a run around and play in the field and he is really getting into the swing of it now! He has amazing focus and toy drive considering what a sad time he had before Sarah and Simon took him on. All credit to them that he is such a playful happy boy now - it makes me grin from ear to ear watching him play :) 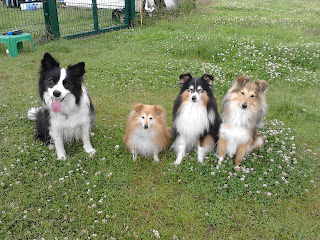 The shelties have had a house guest this week and I made Bailey join in with the posing pictures on a dry day at the field. He is such a lovely dog and again, very toy motivated - wow what a tug he has!! He has to be one of the smallest, cutest male Border Collies I've ever seen. 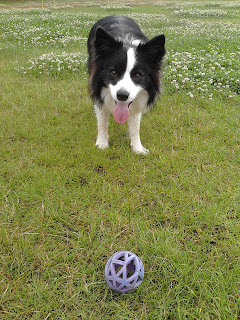 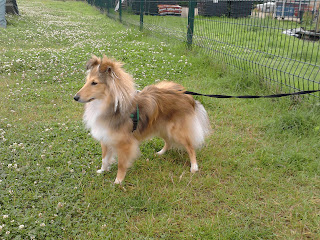 Her ladyship has managed 12 upright weaves and I on her third session I managed to get video of her doing it. It can still be a little bit hit and miss as she is getting her rhythm but as we have shaped lots of her behaviours, she works through failure well and keeps trying.

Some congratulations are in order! Jenni with Rommy and Caroline with Bobby both won their agility class at Wellingborough show which qualifies them for the Starters Challenge Finals next year - woohoo!! They both also move up at grade making Rommy grade 2 (at his second ever show!) and Bobby grade 3. Both dedicated owners, lovely dogs and very well deserved wins!! Also big well done to my friend Jane Emmett with Robbie the sheltie who has won into Grade 6 - he is a pocket rocket and probably won't be in Grade 6 for long!

Will do a Dolly update next time :)