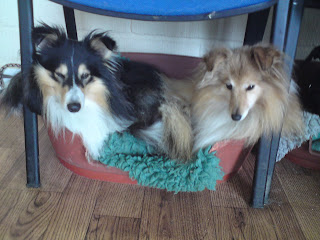 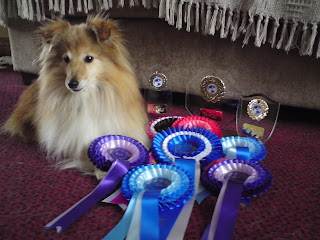 Brax had a great weekend at Letchworth show getting another grade 6 agility win!! She also managed to get two 2nds and a 6th in the C1-7 power and speed. Matthew managed really well despite being ring manager for two days and having two dogs to run! (He got two clear rounds with Brodie on the Fri and Sat in jumping.)

Brax and Saturn got a very good 13th in the Euk pairs and a 6th in mini/mixi pairs on Sunday - what a team! Brodie was going to be having his pairs debut with Lians Sing but poor Sing had a sore back after his agility run and Brodie was quite tired after 3 runs so they didn't compete. Brodie did a lovely run in the C3-5 agility but his silly handler didn't push him out enough over a jump so he had a refusal. Shame as he was going really well - totally my fault! He came out the weaves in the C1-4 HS and was clear in the C1-7 power and speed but no placing. I wasn't on form as my left foot was very numb and running wasn't great for it! After a visit to the docs on monday I have sciatica so poor Brodie has a crocked up mummy!!
Posted by Rhoda at 07:23