I have been missing doing agility a lot, especially as Brodie and I should have been at the UKA National Finals. The good news is that he is seeming better and can do his stretching exercises much easier now so we are on track to get back doing some agility in the new year. I was missing agility so much that I ran Brax at training last week (rare as she is Matthews dog) and I have the bruises to show for it!! She was soooo excited that she nipped me a couple of times after runs, cheeky girl! I didn't mind as she ran beautifully (that and Matt has always let her do it, grr!!) and we had so much fun :) Usually in winter she runs like a snail but this year she is much brighter - I think that being out walking a lot more during the day and not shut in a cold, dark staff room may have something to do with it! 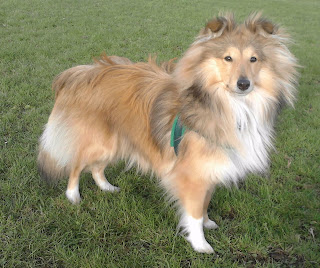 Brooke pups is now 8.5 months old and is gorgeous and crazy! Love her to bits!! She is turning into a snuggle monster and loves laps. The two sable girlies are very similar in a lot of ways and have started playing much more. They are both unusual as well in that they hardly have any white hairs on the tip of their tail. In fact, both of them have black tips to their tail. Brookes coat is getting darker in places but its hard to get a good pic of it! 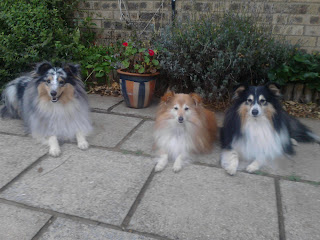 The two older dogs went to Rommy's house for a get together and watched him do the weaves in his garden which he did beautifully! Brax had a go as well but Brodie had to content himself with watering the garden! I love the pic above as it has all three common sheltie colours and they all look so sweet! :)
Posted by Rhoda at 15:41