Our shelties did us proud at Chippenham show yesterday! Its strange to think that it was Brodies first ever KC show last year. To be honest I didn't know how he would run as I am so ring rusty and thought I'd let him down with my handling. He was soooo enthusiastic to be doing agility at a party that he was a tad crazy at times (certain superdog impression on the seesaw!) but ran his little heart out for me. 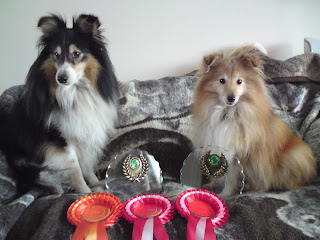 His first class was C1-3 jumping and he got a 5th in it, which I was surprised at as it was a straightforward, flowing course and a lot of dogs went clear. Then he had the G1-3 agility which he flew round and nailed all his running contacts. I was so shocked that he not only won it but was the fastest by a couple of seconds. He didn't hold his wait which was rare but fortunately I saw him move and just started running! My wee man has gone Grade 4 - awwww I'm so proud of him. Sorry about the quality of the video and unfortunately my phone wasn't recording for long enough to catch the end of his run!

In his C1-3 agility, the course was very flowing and I thought I'd take the opportunity to try crossing behind him in the weaves as he needs to practice this. He was running so well, got his dog walk beautifully, managed cross behind in weaves and clear until the seesaw. Well he was having such a great time that he decided just to keep running and forgot to tip it!! He was fine so I didn't put him back on it but we earned 5 faults for his gung-ho approach. Shame as his time was very fast and he would have come 3rd behind two super shelties. (Big well done to Cat Harvey and gorgeous Blue who won). Brodies last class of the day was the pairs with Lian and super Sizzle and walking it I thought how on earth am I going to get this start right. Both tri boys were clear and fast but as neither of us heard the briefing, we didn't realise that you get 25 faults if you put the baton down in the box. I was just so pleased with Brodie going clear!! Here is a link to their pairs run (and look how similar they are, same dad and both boys mums have the same dad)

Bracken had a great day as well. She didn't get to do her first run until almost lunchtime so she was a bit cross and she did a stonking run in her G5-7 agility class. Still can't believe it but she won the class - BRAX HAS GONE GRADE 7!! Who would have thought that our first agility dog would have been such a little superstar! Matthew is looking forward to trying a champ class or two with her now. They had a great run in the C5-7 jumping and ended up one out of the places. She was also going well in the C4-6 agility until the end where she came out of the cloth tunnel and missed a jump. Her contacts and pull throughs were great though!


We gave the dogs a walk with Lian, Colin and their 3 boys in the exercise area. Fab photos to follow! The sun was setting and it made for great pics.
After the show Matthew and I had a yummy meal out with some of our friends in a local pub. It was lovely to catch up with friends in the warm and dry. The food was great and our pudding was so big I had to take a pic of it! 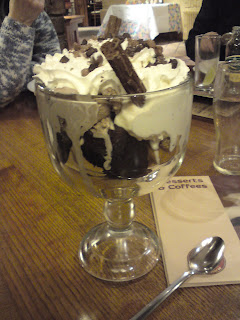